Memoirs of an Aspiring doctor

After camping at Glacier National Park for two days, we headed north to Canada for the first time!! We had allotted for two days at Canada, and if I got to go there again, I am easily going to spend 10-14 days there. Banff is probably Canada’s most well-known national park. However, they also have many other beautiful parks like Yoho, Kootenay, Jasper, Waterton and more! What is even more convenient is that the parks are all within driving distance from each other (45 minutes – two hours driving time). 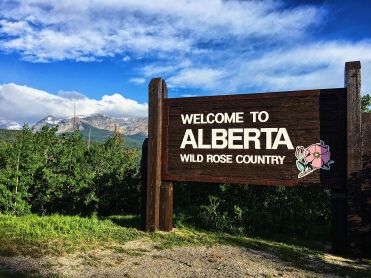 Since we were leaving from Glacier, we decided to stop at Waterton National Park; it took us less than an hour to get there from East Glacier. We also had to throw out any firewood we had to cross the border to prevent the spreading of Dutch Elm disease. If I recall correctly, I think it was $17 to enter the park. We didn’t spend a lot of time there, but we walked around, ate our cinnamon rolls from Rachel, and I was happy to get some starbucks coffee for the road. Below are pictures from Waterton. The lakes were sooo beautiful and you could see it so clearly from inside the Prince of Whales Hotel. 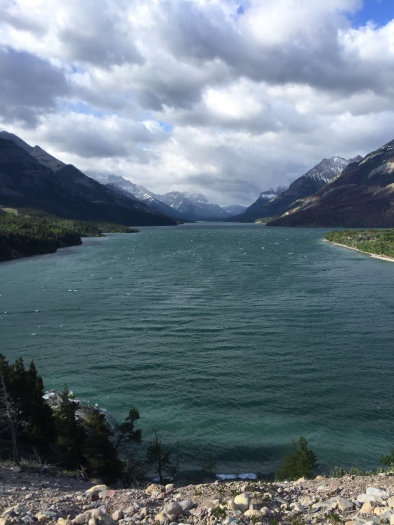 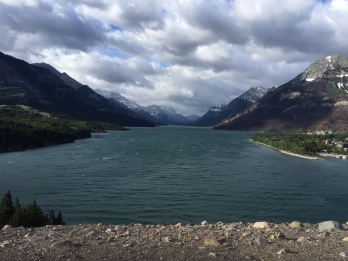 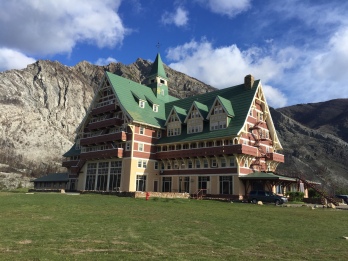 From there, we continued our journey on the road for four more hours til we got to Banff. We didn’t have service in Canada, so we stopped at a McDonalds, ate lunch, and used all the wifi. When we arrived at Banff, we headed straight to Lake Louise. We were overwhelmed with the amount of humans at this park. Lake Louise was very popular, but so worth it. Oh, and even though my boyfriend doesn’t give me photocredit… the top left pic is from his camera roll and maybe a few others throughout the blog — @jonmack0 instagram. 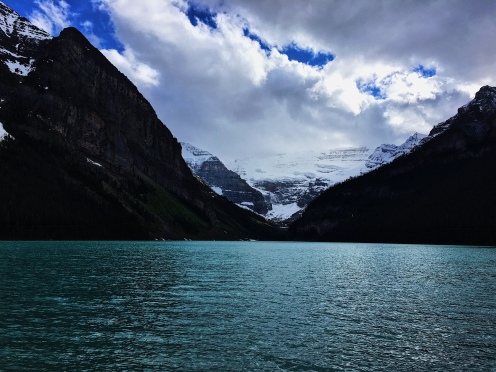 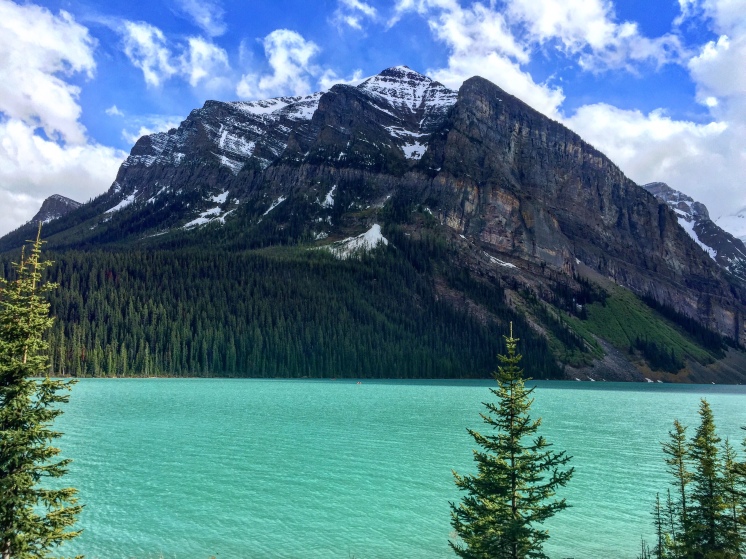 After arriving at Lake Louise, we decided to hike Lake Agnes Trail. This gave us much better views of Lake Louise and it was not as crowded. The trail is 4.4 miles roundtrip and you gain 1312 ft in elevation. I was not ready for this hike. It was a steep incline, the whole way up to the tea house, but regardless it was so worth it. The weather at Banff was ever-changing. I would be snowing one minute, and 70 degrees the next, so make sure to bring lots of layers. People thought I was absolutely insane, but I hiked everywhere (including in the snow), in my Chacos. They are just soo comfortable, and I wore wool socks with them. I am not gonna lie, I got tired of people staring at my feet. Anyways, gotta keep on hiking. On the way up to Lake Agnes, there is another lake called, Mirror Lake, where you can stop and rest (if you are like me and miserably out of shape). 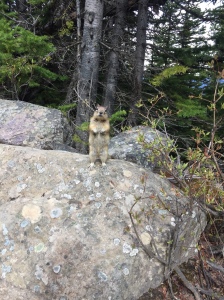 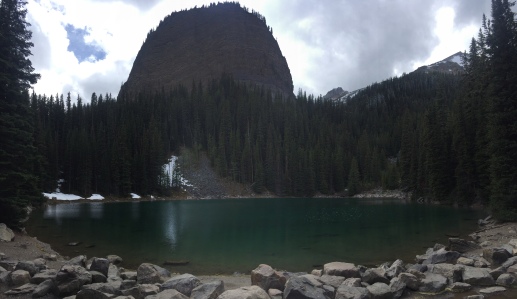 You could also see Lake Louise peeking through on the way up!

After Mirror Lake the worst was over, and you just had to keep on trekking up through the switchbacks to a waterfall, followed by some stairs, and then finally arriving at Lake Agnes.

Lake Agnes pictured below. The Teahouse is opened til about 5 pm every day. By the time we got to Lake Agnes with the elevation increase, it was sooo windy and cold, so the teahouse was a nice break from the wind. I definitely recommend this hike, you get better views of Lake Louise, see Mirror Lake, and make it to the Teahouse — so worth it. 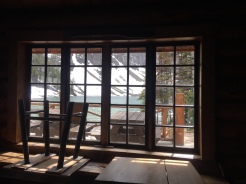 Next, we headed to Banff campgrounds. The campsites were really nice, and you didn’t have to pay for showers. During our stay in the month of June, the nights are mornings were cold, getting down into the 30s, but it was the perfect weather during the day for hiking. We built a fire, had a yummy dinner, and were wiped from the hike.

The next morning, we got up super early to head to the iconic Moraine Lake. Even at 7:30 am this place was hopping. Unfortunately, the clouds were getting in the way of high quality pictures, but we stuck around and waited for them to clear. I think there were at least two different engagement photo shoots going on at Moraine. I definitely recommend going early, because the parking lot fills early and then you cannot get in. 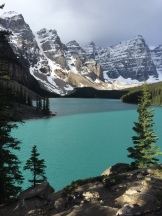 From Moraine, we headed for the Icefield Parkway (highway 93) to check out the scenic route and make it to Peyto Lake. While we were at Glacier, we ran into some campers who had just came from Banff and told us that we had to go to Peyto, and they were right. This was by far my favorite spot we went to on this trip. Here are some pictures of the Canadian Rockies along the scenic drive. 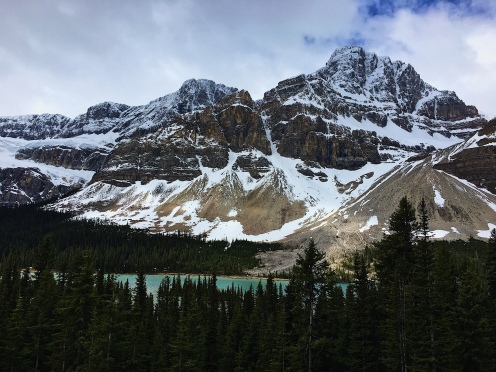 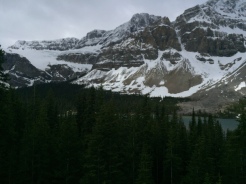 We stopped at Bow Summit to access the trail to Peyto Lake, and it is also the highest point along the highway! Oh our hike up to Peyto, it was snowing and it was so cold, but once again it was 100% worth it. 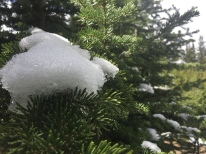 The hike takes you to an overlook of Peyto Lake. The first overlook was very crowded, however, if you keep going on the trail instead of going the same way down, you end up finding another overlook that is nearly deserted. This hike is one that Jon and I will never forget, because we lost each other (if you ask him, it’s my fault). We were headed back from the overlook, and often times he goes ahead, or explores other paths, because he’s into that and it gives me a chance to rest. So, he went up this alternate pathway and I said I would mosey around and head towards the car; I knew he would catch up. However, it had been about 15-20 minutes, and I started to wonder where he was. I decided to follow the path he took and start looking for him. I was asking everyone if they had seen the guy in the red beenie. After following the path, I arrived at the deserted overlook of Peyto, and man was it beautiful. I was looking for Jon, and I couldn’t find him anywhere. I stayed put for about ten minutes, and then decided to go back. Apparently, everyone was telling Jon that the girl in sandals was looking for him (chacos are life). Jon had gone to the end of the trail, back up the trail, and then back to the alternate route where I had gone (sorry babe haha ). We eventually found each other, and he was pissed at me for not staying put. We spent well over an hour at the second overlook taking it all in and chatting with other hikers. Please do not skip out on the second overlook. My pictures at the first overlook literally had selfie sticks in it, because people were so abundant and desperate to get their selfies. 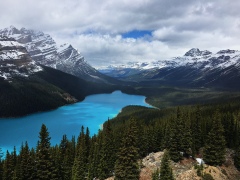 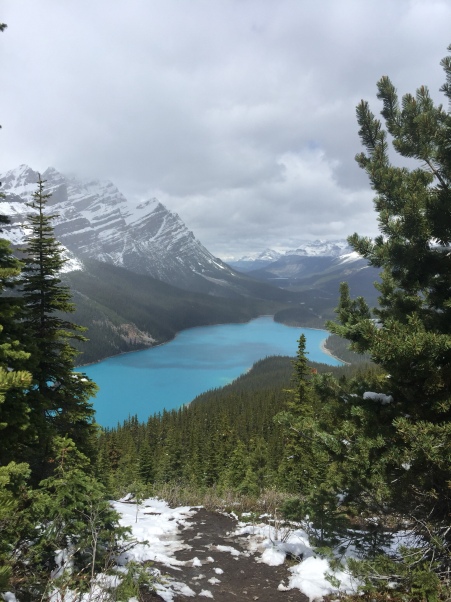 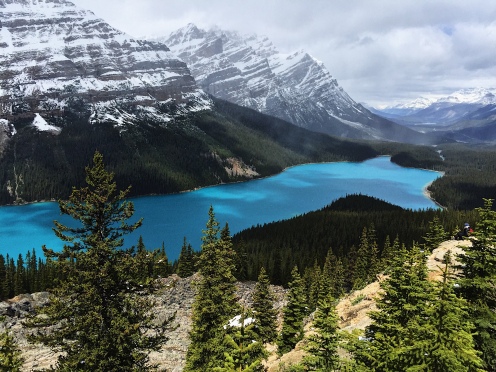 Have you ever seen anything more beautiful than that? I also found a cute chipmunk (I think). After Peyto, we headed to Lake Minnewanka. It was beautiful, but we didn’t get good pictures.

Banff was beautiful. I will go back and visit the other parks and Banff again. It’s hard to say what I would recommend doing/seeing, because everything is so beautiful, and you have to see it all. Don’t sleep on the Icefields parkway, Peyto Lake, Moraine Lake, or Lake Louise.